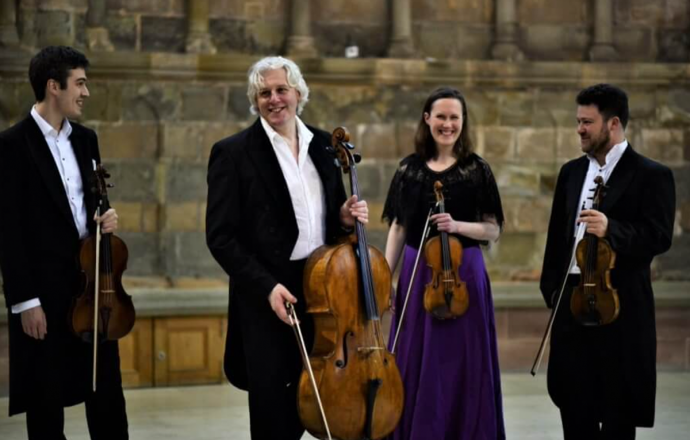 The players are back! Unbelievable really but the concerts I have seen over the past four weeks have encouraged me tentatively to look forward to a future of live music.

I kicked off, very nervously as this was my first concert since March 2020, by attending the Royal Northern Sinfonia, Beethoven’s Fourth Series. Dinis Sousa, conductor, took us from Wagner to Kaija Saariaho, to Beethoven no.4 and in the midst of all this beauty he announced Maria Wloszczowska to be their new leader…..we, the audience, erupted! It was emotional.

Then Paxton House, Summer Festival of Chamber Music. I indulged in a baroque group, the Brook Street Band, then the well-known Gould Piano Trio with Beethoven and Mendelssohn, and finally Imogen Cooper with Ravel and Schubert. She took my breath away. Such pleasure.

A short hike to Alnwick and the amazing Dante Quartet (see pic at the top of your screen) left me spellbound. Schubert, Haydn and an unfamiliar (to me anyway) English composer Robert Simpson, (at which I witnessed Olympic level athlete stamina from all four players). The intensity was overwhelming. Zoe Beyers, happy to chat afterwards, maybe not realising how special it is for us to hear her perform.

All these string players will be getting to grips with far more than I had to, just sitting back in the audience absorbing and rejoicing in the pleasure of live strings. They have been concertless, the show has not gone on, the curtain has not risen, for a fair chunk of the past 18 months. Practising alone, rehearsing alone, just their instrument for companionship. And how does their instrument feel? It is suddenly being asked to accommodate and fill a vast space again. To respond to every touch, to perform like it has in the past, to give its all.

If there was ever a time to have your violin, viola or cello looked over it is now. Before the slightly neglected open seam starts to gape and cause more damage. Before the build-up of rosin on the front starts to eat into the varnish. Before the glue in the old cracks starts to dry and cause a potential buzz.

Or are you at the opposite end of the scale? Maybe your instrument hasn’t seen the light of day as you couldn’t be motivated, life just got in the way, things just happened, it’s been tough. If you will show me, allow me to diagnose, perhaps it’s as simple as a little gluing or a new set of strings to help you fall back in love with your old friend.

Having your instrument checked costs nothing, and yet the benefits are massive. The freedom it affords you in your playing and creativity when you know all is well. The small tonal adjustment you decide on frees your suffocating instrument. The pegs that have slipped in the heat can be adjusted and friction returns. The varnish wearing away, being stripped from the shoulder, can be restored. All these aspects and many more can be checked and discussed.

Your instrument not only needs this but if we’re being really honest about it, deserves it.

Just get in touch to book an appointment. Email or telephone.